Yes, Peggy, rumor has it that Founding Father Alexander Hamilton was a bit of a dog when it came to the ladies.

Actually, you could say he was more of a tomcat; and George Washington’s wife, Martha, seemed to agree.

That’s apparently why Martha Washington named their feral tomcat “Hamilton,” after Alexander due to his reputation as a scoundrel and womanizer.

This rumor is mentioned in “Hamilton” the musical

Actually, this historical rumor is mentioned in the Broadway show Hamilton, and explained in a tweet by creator Lin Manuel Miranda:

@drewsclues825 Martha Washington once named a feral tomcat after him, because both he n the cat went prowling for ladies on the reg.

If you are a fan of the Hamilton Soundtrack, you’ll know that Lin Manuel Miranda mentions this fact in the song, “A Winter’s Ball“:

Aaron Burr
“(Ladies) They delighted and distracted him,
Martha Washington named her feral tomcat after him!”

They also refer to Alexander Hamilton as, “The Tomcat” in the song, “The Story of Tonight”:

“I’ve seen wonders great and small,
‘Cause if the tomcat can get married,
There’s hope for our ass, after all!”

“When the sword is once drawn, the passions of men observe no bounds of moderation.” – Alexander Hamilton

(Ummm… double entendre?)  Anyway, it was apparently Hamilton’s curiosity with the ladies (and not observing the “bounds of moderation”) that killed his political career, specifically when he admitted to a lengthy affair with a married woman in the 95-page “Reynold’s Pamphlet“ of 1797.

In fact, John Adams wife, Abigail, once wrote that Hamilton represented “lasciviousness itself.”

Hmmm… Sounds like Hamilton’s reputation of being a tomcat is well-deserved.

Although Hamilton did seem to always land on his feet, the last of his nine lives ended in 1804 when he was mortally wounded in a famous duel with Aaron Burr.

Did Martha Washington name her cat after Alexander Hamilton? 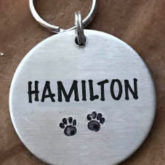 Because there is no written records about the Washington’s cats, it would be hard to prove the rumor definitively either way.

However, the story seems to have credibility, and bones found around Mt. Vernon confirm that feral cats were present while the Washington’s lived there.

Also, (like a stripper?) Alexander Hamilton had serious daddy issues and was probably hoping that women could provide him the love and attention that he never got from his parents.

So, Peggy, the rumor that Martha Washington named her cat after Alexander Hamilton is probably true.

As you can imagine, having a cat named after you is the highest of honors for any human, so Hamilton’s eponymous kitty at Mt. Vernon is surely his most significant legacy. (maybe?)

So, What is a “feral tomcat” anyway? 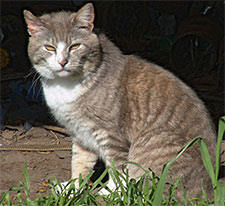 A “feral” cat is a free-roaming feline that lives in the wild and is untamed.  A feral cat uses its hunting skills and wild ways to survive.

A tomcat is a male cat. It’s also defined as, “one who pursues women (Mariah Reynolds, etc.) promiscuously for sexual gratification.” (Alexander Hamilton?)

One thought on “Did Martha Washington Name Her Cat After Alexander Hamilton?”